Now it’s time to build buildings by printing! One of the most exciting new technological developments of the past two decades has been the invention and commercialization of 3D printing. Once the stuff of science fiction, it is now very real and used in fields as diverse as biotechnology and manufacturing, and we are even starting to see it used in hospitals to make prosthetics or to create cell casts during surgery. The construction industry is not about to be left behind by this innovation.

Architectural 3D printing technology has been around since the early 2000s and its use continues to grow. Let’s learn more about what 3D printing is, its impact on the construction industry, and Samsung C&T’s efforts to develop this technology.

The principle of 3D printing is easy to understand. Also called printing or additive manufacturing, it involves depositing layer upon layer of material using a print head that basically resembles the one seen inside an inkjet printer. . The material to be deposited can vary from concrete, to metal, to polymer and resin, and it fuses or bonds with previously deposited layers. The key to this process is that the material is not dropped randomly, but follows a 3D model that was created on the computer using CAD software.

In its early days, 3D printing used in construction made it possible to create 3D models such as bricks or landscaping ornaments, prototypes, and small non-structural building parts. But further development of the technology means it can now be used to create entire buildings.

There are several advantages to using 3D printing technology. First, it reduces the overall build time. Then there is a reduction in safety accidents through reduced labor input. Third, costs can be reduced.

Green building due to less construction waste is another plus. In reality, a recent study found that depending on the type of cement used, a 3D printed building can have significant savings in construction waste and energy consumption throughout the life cycle of the building. In addition, it can significantly reduce carbon dioxide emissions.

With all these advantages, 3D printing construction technology is also useful for quickly preparing residential facilities in disaster areas, places with large numbers of displaced people, and conflict zones. 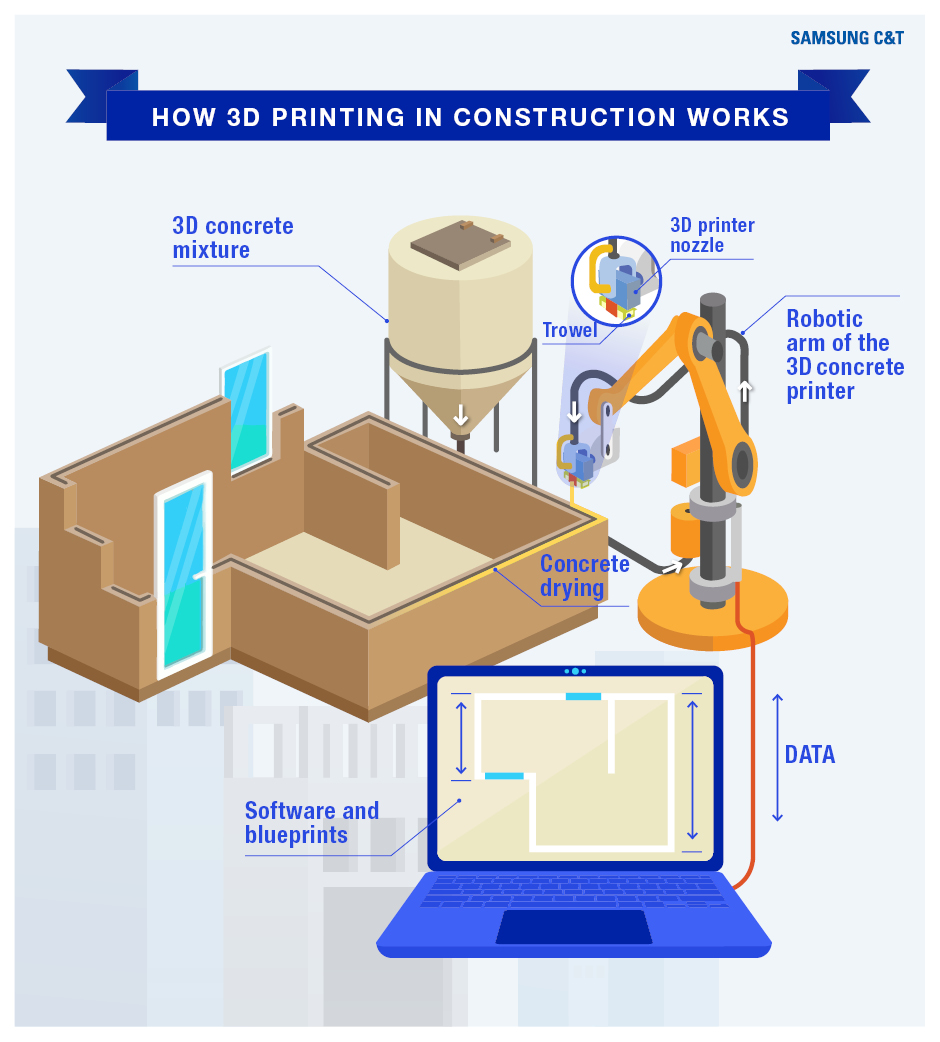 The prospects of construction by 3D printing

A recent market research found that the global 3D printing construction market size was USD 1.4 billion in 2021 and is expected to increase sharply to reach USD 750.8 billion by 2031, eight years from now.

If research on architectural mechanics, 3D printing technology and artificial intelligence control technology continues, it will be possible in the near future to design a simple house directly with a smartphone app and build it with a 3D printer.

Barriers to the adoption of 3D printing technology in construction include the high initial investment cost, the fact that it is not yet possible to build a fully completed house with just a 3D printer, and the lack of certifications, safety standards and regulations in most cases. countries for buildings made by 3D printing.

Despite the high – and constantly growing – interest in the construction sector, as well as the work of several research and development (R&D) organizations and 3D printer manufacturers, the market for related technologies is still relatively underdeveloped. This means that the field is still a so-called “blue ocean” and opportunities abound.

If the expectations that the technology will continue to advance are met, it has been predicted that 3D printing construction will play a decisive role in the development of space. In October 2020, Nasa announced that it has begun research into building habitats on the Moon and Mars in partnership with a 3D printing company.

Additionally, in April this year, Samsung C&T Engineering & Construction Group signed a business agreement to jointly develop the technology of a robotic arm 3D printer and use it to build non-load-bearing walls.

Through this agreement, Samsung C&T will continue to innovate and advance 3D printing equipment technology, construction technology and material technology. In addition, Samsung C&T plans to use the technological results not only in the existing fields of 3D architecture and landscaping, but also in various fields of civil engineering, and gradually expand the distribution and application. 3D printers for construction.

Samsung C&T E&C Group aims to create an ecosystem that can use 3D printing throughout construction and secure source technologies preemptively to improve technology competitiveness and reduce safety and quality risks.

The field of 3D printing construction is still nascent, but given the interest and technological growth so far, future changes in building construction with printers are highly anticipated.