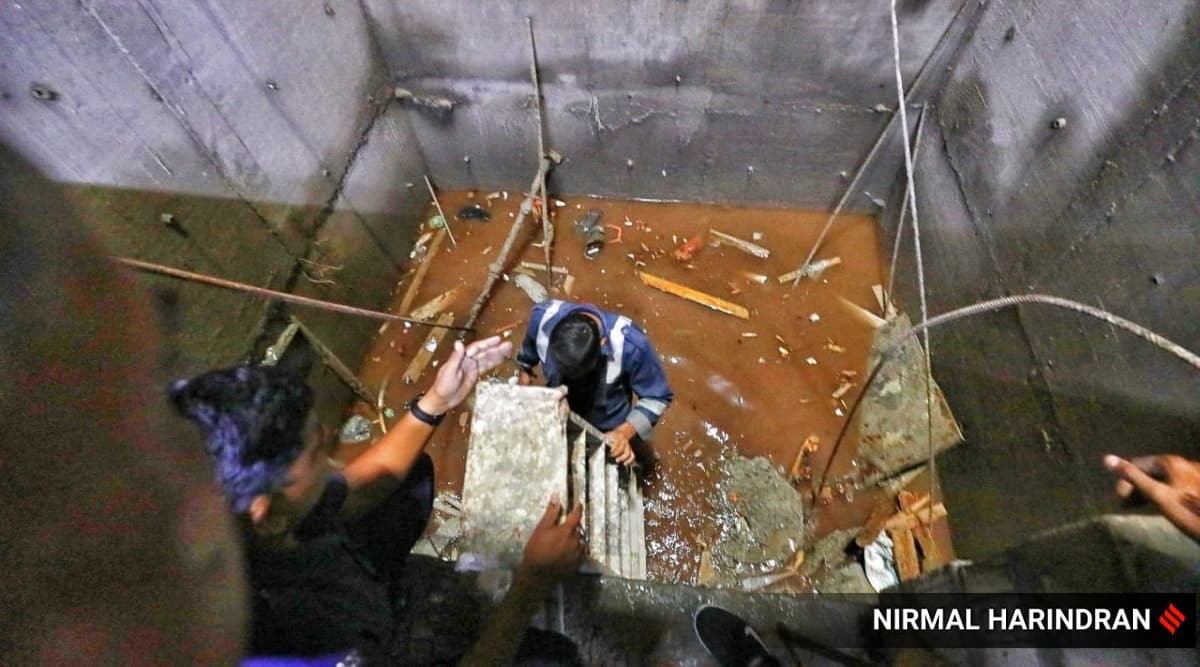 Three people, including a contractor and two sub-contractors, have been arrested after seven workers were killed and one seriously injured when an elevator in a building under construction collapsed in the Panjra Pol area of ​​Ahmedabad on Wednesday.

The accident is said to have happened around 9 a.m. Wednesday when the centering of a terrace of the Adore Aspire 2 building under construction collapsed on workers working in the elevator shaft.

“It was reported that the workers fell in the basement. Six of them – Jagdish Naik (21), Sanjay Babubhai Naik (20), Ashwin Naik (20), Sanjay Mangabhai Naik (24), Shailesh Naik (20) and Mukesh Naik (25) – were working on a board. So when the centering of the terrace collapsed, they fell into the basement. The other two – Rajmal Kharadi (25) and Pankaj Kharadi (21) – who worked on the open side of the sixth floor also fell due to the centering collapse,” a police statement said. “They were picked up by the other workers working at the site and rushed to hospitals by 108 emergency services,” said Om Jadeja, divisional fire officer in Ahmedabad.

According to him, three workers – Rajmal Kharadi, Sanjay Mangabhai Naik and Shailesh Naik – were brought dead to VS General Hospital, while the other four were taken to Sola Civil Hospital. Of the four, Ashwin Naik, Sanjay Babubhai Naik, Jagdish Naik and Mukesh Naik were pronounced dead, while Pankaj Kharadi is in critical condition.

“Jagdish, Sanjay Mangabhai, Shailesh and Mukesh were from Panchmahal district, while Sanjay Babu and Ashwin were from Dahod. Rajmal and Pankaj were from Banswara district in Rajasthan,” the press release states.

He further said that contractor Saurabh Shah, along with Dinesh Prajapati and Nimesh Patel – both contractors – were arrested under ICC Section 304 (sentence for culpable homicide not constituting murder) and of Article 114 (commentator present when the offense is committed). “No safety nets or other safety measures were used for workers working in the passageway/lift duct. Gross negligence and dishonesty has been demonstrated knowing there is a risk to the lives of the workers,” the statement read.

“The investigation is still ongoing at the site. We only know that the centering at the terrace of the thirteen-story building broke and fell on these workers who were above the elevator shaft where they were working said VJ Jadeja, an investigator at Gujarat University Police Station.

Earlier today, Prime Minister Narendra Modi took to Twitter to offer his condolences over the crash. “The incident at a building under construction in Ahmedabad is saddening. Condolences to those who lost family members in this accident. I hope the injured will recover soon. Local authorities are providing all possible assistance to those affected,” the PMO Twitter account quoted Modi as saying.

Meanwhile, authorities from the Ahmedabad Municipal Corporation (AMC) Fire Department and Emergency Services claimed to have received no communications or calls. The incident is believed to have occurred around 9:00 a.m. Wednesday in the Adore Aspire 2 under construction. The fire and police team arrived at the scene at 1:00 p.m.

Fire chief Jayesh Khadia told media that no information had been received about the incident. “We learned of the incident through media reports and phone calls received from reporters. Therefore, I arrived on the spot to verify what happened. There has been no official communication or information shared by the developers or any other agency,” Khadia said.

“I also work at a construction site nearby. My brother Shailesh Naik and my neighbor Sanjay Mangabhai Naik are from Vav Kulli village in Ghoghamba taluka of Panchmahal district. I learned of the incident around 10:30 a.m. We have been working on the site for 2 months,” said Suresh Naik.

Keshu Kalwa, Pankaj Kharadi’s brother-in-law, said: “I received a call around 1pm from Pankaj’s younger brother, who was working at another site nearby, to reach Sola Civil Hospital. He is critical. Pankaj belongs to the Banswara village of Rajasthan. He has been working on the site for four months.

CMA Standing Committee Chairman Hitesh Barot said it was a private building and therefore building plans and other approvals must be inspected to investigate the incident.

Meanwhile, Jayesh Patel, Secretary of Ahmedabad District Organizing Committee of Socialist Unity Center of India (Communist) [SUCI (C)], wrote to Gujarat Chief Minister Bhupendra Patel, demanding tough penalties for those responsible, including the builder, structural engineer, Ahmedabad Municipal Corporation (AMC) and officers who handled the construction permit. construction of the building. In addition, SUCI (C) demanded fair compensation for the families of the deceased, the employment of a deserving family member and free treatment for the injured of the mason.