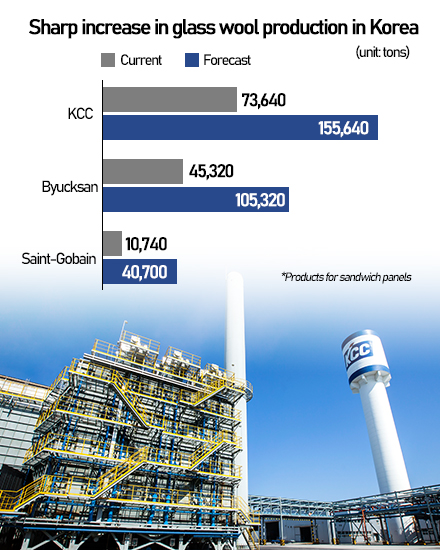 According to industry sources on Wednesday, KCC plans to more than double its production capacity of glass wool for sandwich panels to 155,640 tons from the current 73,640 tons. KCC is currently upgrading glass wool production facilities at its manufacturing sites in Korea and its capacity expansion project is expected to be completed by October next year.

Glass wool, an insulating material made from fiberglass, is used to cover the duct, which is a passage for air and gas flow.

KCC and Byucksan dominate the domestic glass wool market with 50% and 40% market share, respectively. Its smaller rival, Saint-Gobain, headquartered in France, plans to quadruple its production of glass wool for sandwich panels to 40,000 tonnes in Korea.

Under amended building construction rules that came into force in December last year, fire-resistant or flame-retardant materials must be used for interior and exterior finishing materials of buildings instead of cheap organic insulation materials. such as polystyrene and polyurethane.

By Yang Yeon-ho and Minu Kim