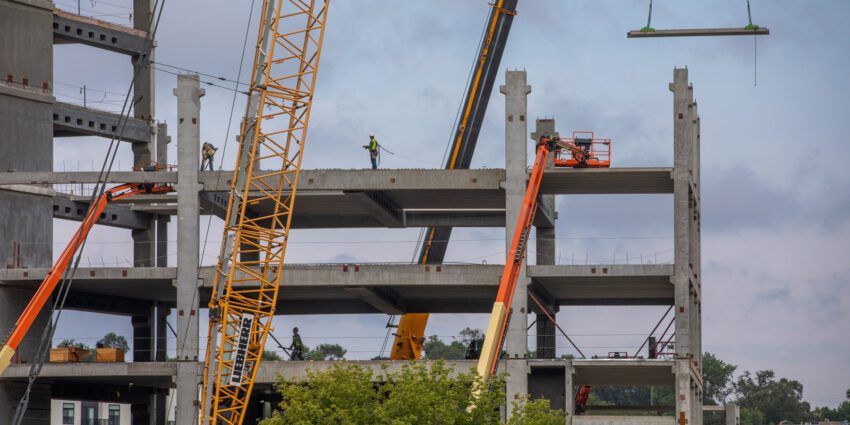 Sioux Falls set a record for annual construction activity, topping $1.5 billion in permits, thanks to its strongest August on record.

Permits for the month totaled more than $450 million, driven by the three main projects of the year so far:

“I’ve never seen anything like it,” said Butch Warrington, the city’s building manager. “It was a perfect storm where all these big projects happened in the same month.”

“So 10 years ago it wouldn’t quite have been the whole year,” Warrington said.

So far this year, there has been $961.9 million in new commercial construction, compared to $300.5 million in the same period last year.

“In residential, I think they’re doing as much work as possible,” Warrington said. “I think there is a labor problem, but I also think there is a material problem…and I heard through the grapevine that this is a big problem right now. I don’t know who gets all the concrete, but I’ve heard that for small residentials it gets really tough.

Building permits were issued for 2,873 apartments compared to 1,479 last year.

Among other major permits in August, the city issued one for the third building at Cherapa Place, which will be a mix of retail and apartments, at $37.7 million. Two apartment complexes, Willows Edge Estates at 7501 E. 10th St. and a project at 85th Street and Brett Avenue, totaled $15.3 million and $14.7 million, respectively.

Another phase of the PowderHaus apartments at 2901 S. Burnsfield Ave. received a $9.4 million permit, and a renovation of Solberg Hall on the Augustana University campus cost $7 million.

As for permits that have yet to be issued, there are some big projects underway, but not necessarily enough to break the $2 billion mark for the year, Warrington said.

“Even if we get a bigger project coming now, they’re going to push for footings and foundations because they’re only four months old,” he said.

Other projects that have not yet been authorized include the Midco Ice Arena at Augustana University, the expansion of Dillard’s at The Empire Mall, and the fourth mixed-use building at Cherapa Place.

“And we probably have apartments that will still go,” Warrington said.

“But this next month will be really interesting because last year is about now when the number of plans increased in our queue until you were two months late to issue whatever it would be. We have an additional blueprint reviewer this year, and it’s really paid off, but we should start seeing the blueprints where they want to get some grounding and foundation this year. Next month is going to be really interesting to see what happens.